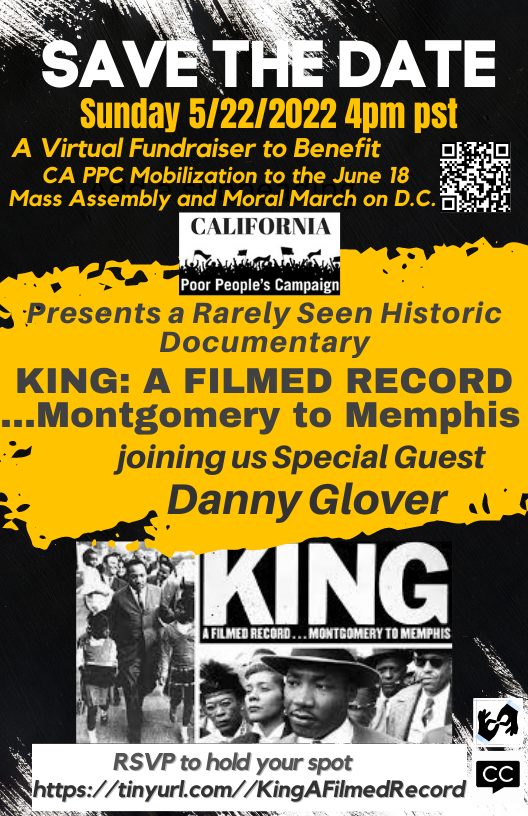 Momentum is building for the Poor People’s Campaign Mass Assembly and Moral March on Washington DC, which is now just one month away. More than one thousand poor and low-income Californians have declared their intention to march on our nation’s capital and demonstrate the power of our moral movement.

You’re invited to a very special virtual film screening event this Sunday, May 22 at 4pm in support of the upcoming Mass Assembly and Moral March. The California Poor People’s Campaign will be airing a rarely seen historic documentary, “King: A Filmed Record… Montgomery to Memphis.” The screening will feature a very special guest, actor and activist Danny Glover, and will be raising money to support the travel costs for poor Californians traveling to Washington DC.

RSVP to hold your spot for the screening of “King: A Filmed Record… Montgomery to Memphis” with special guest Danny Glover

The legacy of Dr. Martin Luther King continues through today with the unyielding efforts of the Poor People’s Campaign: A National Call for Moral Revival to take on the interlocking injustices of systemic racism, poverty, ecological devastation, militarism and the war economy, and the distorted moral narrative of religious nationalism. Join this screening to learn more about Dr. King’s work and to support the travel of low-income Californians to Washington DC.

Forward together — not one step back!