Recognizing the True Costs of War 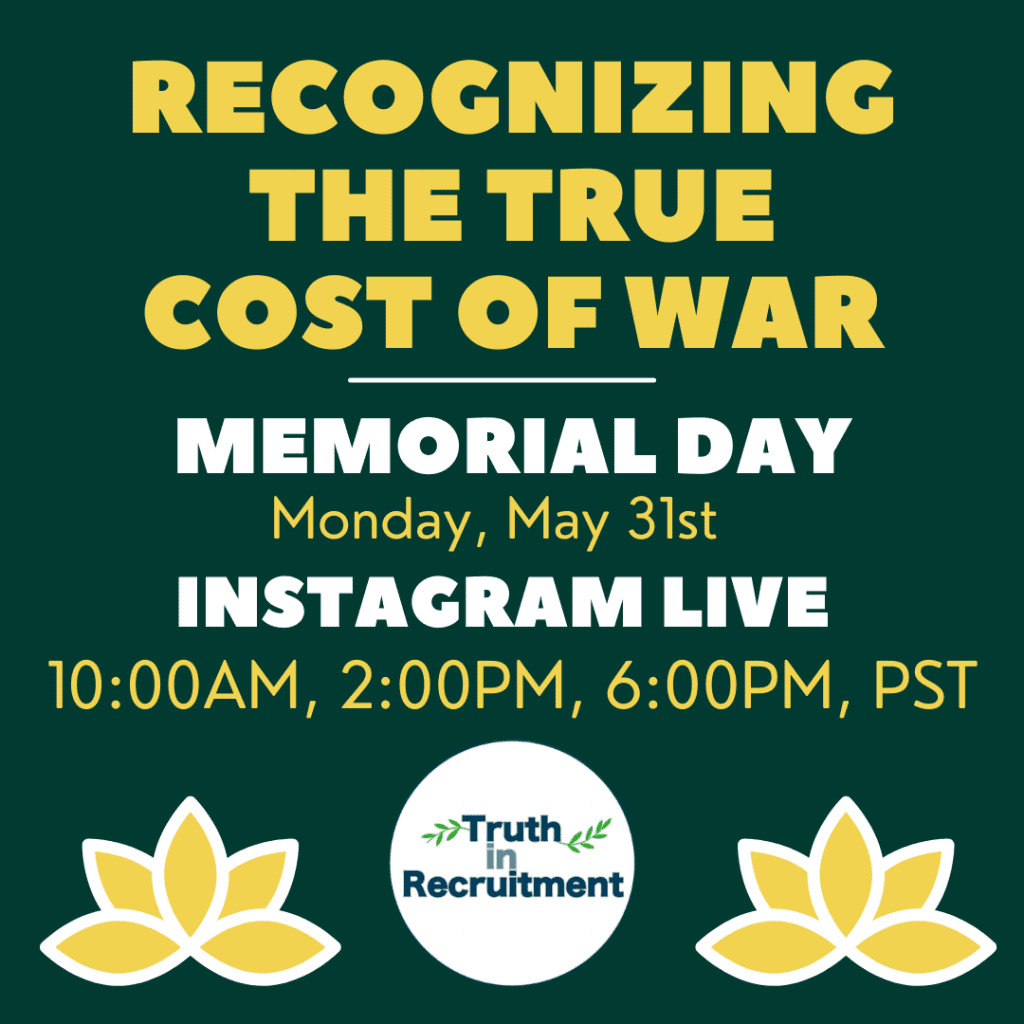 Join us this Memorial Day, May 31, 2021 in conversation with veterans and conscientious objectors in recognizing the true costs of war only on Instagram Live @TruthInRecruitment

Meet Kyle Toon at 10am. Kyle was born in Lexington Park, MD, and joined the Army in 2010 after graduating from Gar-Field Senior High School in 2009. Kyle submitted his conscientious objector claim in February 2019 after years of suppressing intrusive thoughts on the implications of war and living with cognitive dissonance and incongruence. Kyle believes in the essence of reconciliatory grace, nonviolence passivity, transcendentalism, and peaceable approaches to mend and strengthen communities.

Meet Monisha Rios at 2pm. Monisha is a Persian Gulf Era army veteran, social worker, activist, educator, and doctoral candidate at Saybrook University’s Psychology program with a specialization in Transformative Social Change. She is the creator of MIRA, a grassroots research project focusing on moral injuries related to the causes and consequences of U.S. wars, from the perspectives of impacted communities and ecosystems.

Meet Eddie Falcón at 6pm. Eddie has been involved in activism in California’s Bay Area since shortly after his separation from the Air Force in December of 2005. He has had membership in groups such as About Face, Before Enlisting, Bay Area Copwatch chapters, Unconventional Action in the Bay, and Warrior Writers. This work has brought him to speak in local high schools, colleges, youth programs, and at events across Europe, North America, Japan, and the Middle East about his military experience and Anti-War perspective.

Meet Siri Margerin at 6pm. Siri is a long-haul activist and organizer laboring to bring options and information to youth being recruited into the military, GI rights and offering resources to service members in need, to participate in campaigns to Drop the MIC (Military Industrial Complex) And to fight like hell-o for transformation and liberation. She is proud to work with About Face Veterans Against the War, Before Enlisting, The GI Rights Hotline. She is blessed to be a parent, grand-parent, and the person to non-human companions.