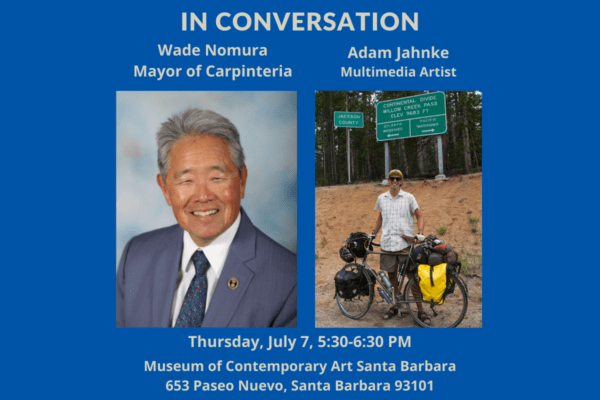 MCASB is delighted to invite you to a conversation between Wade Nomura, Mayor of Carpinteria, and Adam Jahnke, Multimedia Artist. As part of Adam Jahnke’s contribution to the Community Classroom, this conversation will explore Mr. Nomura’s history and contribution to our region, the founding of Nomura Racing, and Santa Barbara’s cycling history.

Established in Santa Barbara in 1979, Nomura Racing was a bicycle shop and BMX racing team that pioneered a data and material-driven approach to bicycle frame fabrication. This perspective about the bicycle and bicycle racing by Wade Nomura quickly garnered attention for both the cost attached to a Nomura frame and also through the numerous titles won by Nomura Racing.

In the mid 80’s Wade discontinued making bicycle frames after suffering an injury racing. Since ceasing production, Wade Nomura’s impact on the evolution of the mountain bike in California and cycling culture in the United States is unavoidable. As a result of Wade’s creations, his bicycle frames have since become doggedly sought after by collectors all over the world.

The success of Nomura Racing is deeply rooted in Wade’s creative spirit and passion to foster a shared experience between people. Whether exemplified through his landscaping business or work with the Rotary Club, Wade finds joy in community building and community service.

This event is FREE, however, due to limited space, reservations are required