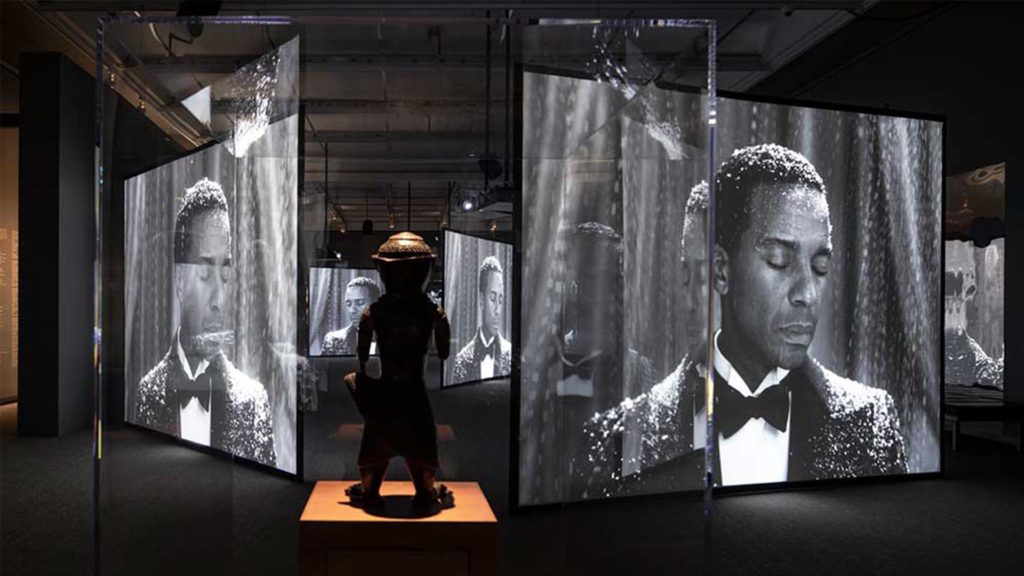 Join us for a discussion with Isaac Julien about his process of creating Once Again… (Statues Never Die). Commissioned by the Barnes Foundation on the occasion of its 100th Anniversary in 2022, Julien’s immersive, black-and-white, five-screen, on-site video installation Once Again… (Statues Never Die) brings to light the relationship between Dr. Albert C. Barnes, who was an early U.S. collector and exhibitor of African material culture, and the famed African American philosopher and cultural critic Alain Locke, known as the “Father of the Harlem Renaissance.” A reception will follow.
Discussants will include Mark Nash, Professor at UC Santa Cruz, and Jeffrey Stewart, Distinguished Professor and MacArthur Foundation Chair in Black Studies and Interim Vice Chancellor for Diversity, Equity, and Inclusion at UCSB. Susan Solt, Distinguished Professor of Theater Arts at UC Santa Cruz, will moderate.
Attendees will receive a link to the film in its single-screen format.
Sir Isaac Julien KBE RA is Distinguished Professor of the Arts at UC Santa Cruz, where he also leads the Isaac Julien Lab together with Arts Professor Mark Nash. Julien is the recipient of The Royal Academy of Arts Charles Wollaston Award 2017. Most recently, he was awarded a Kaiserring Goslar Award in 2022, and was granted a knighthood as part of the Queen’s Honours List in 2022.
Sponsored by the IHC’s Hester and Cedric Crowell Endowment and the UCSB Office of Diversity, Equity, and Inclusion
Free to attend; for more information, visit the IHC event page: bit.ly/Julien-IHC