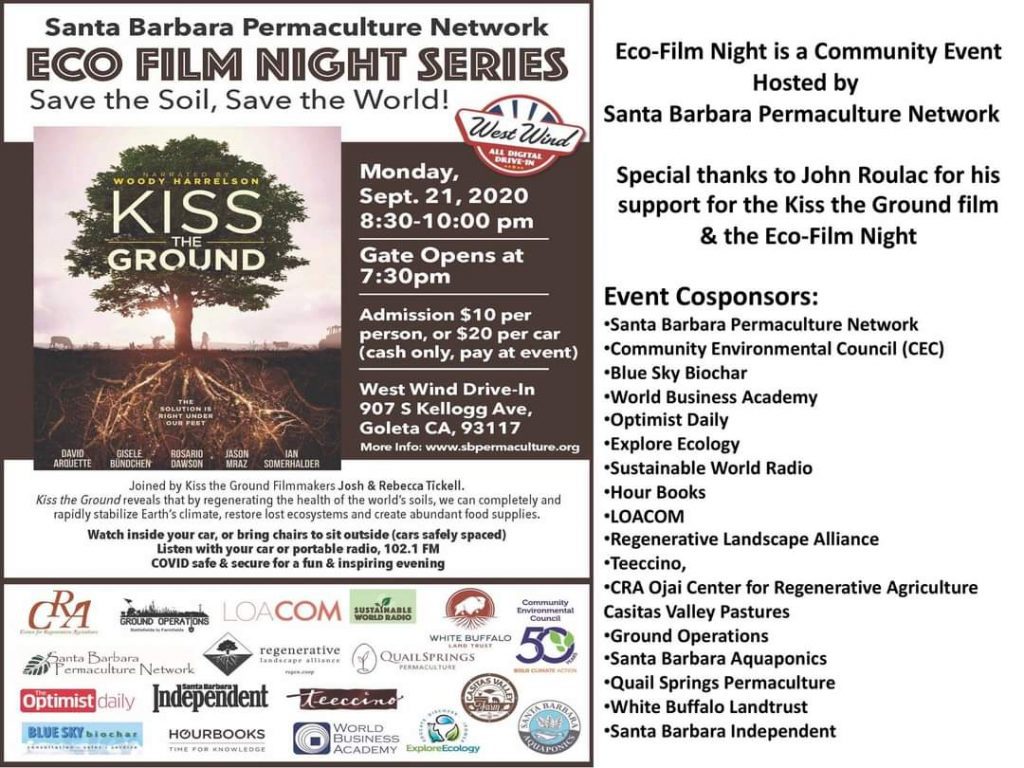 Please join Santa Barbara Permaculture Network on Monday, September 21, as we continue our Eco-Film Night series at the West Wind Drive-In with the newly released documentary Kiss the Ground. Big Picture Ranch filmmakers Josh & Rebecca Tickell, who also authored the groundbreaking book with the same title, will be in attendance, sharing with the audience their seven-year journey making the film.

Carbon is a naturally occurring chemical compound vital to life, that provides soil its fertility and water holding capacity, but since the industrial revolution and the advent of modern farming practices, too much carbon has been released into the atmosphere, causing climate disruption with increases in temperatures and extreme weather events around the world.
Kiss the Ground reveals that by regenerating the health of the world’s soils, we can completely and rapidly stabilize Earth’s climate, restore lost ecosystems and create abundant food supplies. And not a minute too soon!

Using compelling graphics and visuals, along with striking NASA and NOAA footage, Kiss the Ground artfully illustrates how by drawing down atmospheric carbon, soil is the missing piece of the climate puzzle. This film is positioned to effectively educate and catalyze a movement to accomplish the impossible – to solve humanity’s greatest challenge, to balance the climate, and secure our species future.

Featured in the film are many illustrious climate problem solvers, including Paul Hawken, Ray Archuleta, John Wick, David Bronner, to list just a few, but of special note for our community, Santa Barbara Permaculture Network’s 2019 Eco-Hero Award recipient, John D. Liu, of Ecosystem Restoration Camps.
Come join us as we share another community event at the unique setting of our local drive-in, adapting in a creative way to the realities of COVID. We will start the evening with a chance to hear from our exemplary cosponsors about their work, and also, a short film debut by Ray Cirino, who created a fun children’s film about Beaver to begin the evening.