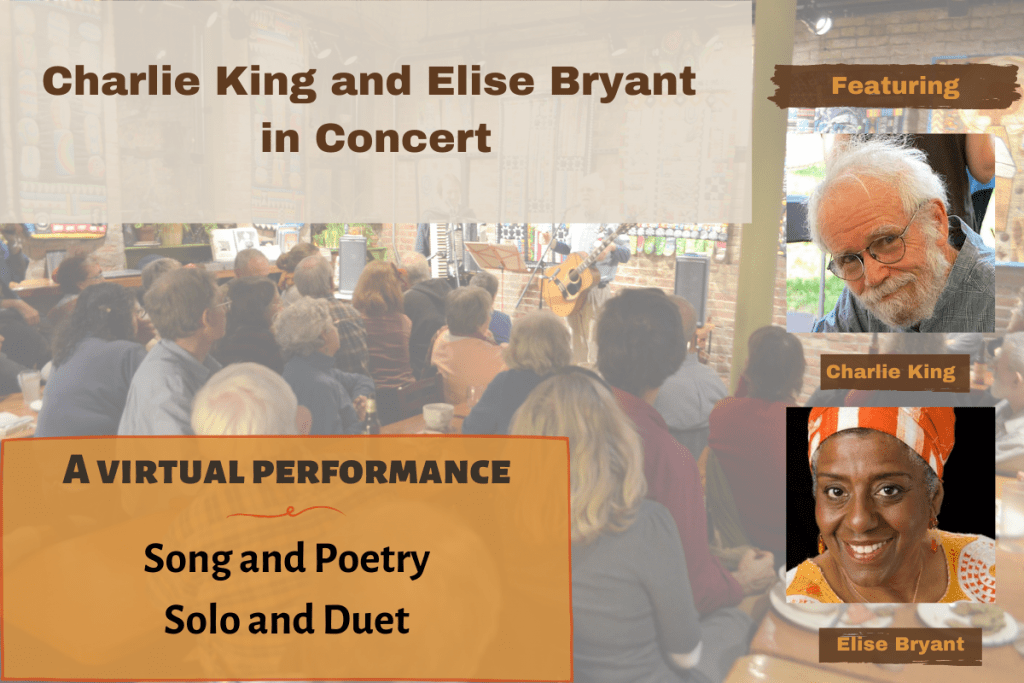 They will share songs and poetry commemorating the struggles—past and present—of workers in the US and around the world.
It’s a pleasurable, inspiring way to help SBCAN’s efforts, including right now advocating for hazard pay for frontline grocery and pharmacy workers in our county.

Tickets are $10 each for the online event, which benefits SBCAN.

Purchase your tickets at sbcan.org/celebrate_may_day

Charlie King is a musical storyteller and political satirist. Pete Seeger hailed him as “One of the finest singers and songwriters of our time.” He is the 2018 recipient of the Phil Ochs Award; also the War Resisters League’s Peacemaker Award, given to Charlie and Odetta; the Sacco-Vanzetti Social Justice Award, nominated by Pete Seeger; and the Joe Hill Award. Like Elise, Charlie is a Wobblie (Industrial Workers of the World) and a founding member of AFM Local 1000. Folk legend Peggy Seeger says, “If we had more Charlie Kings in the world I’d be less worried,” and Tom Paxton adds, “Luckily, we have him!” Learn more about him at his website: charlieking.org You’ll find his Facebook page here: https://www.facebook.com/charliekingmusicalstoryteller

Elise Bryant is a singer, actor, writer and spoken word artist. She currently serves as the executive director of the Labor Heritage Foundation, a nonprofit organization that is the “art and soul of the labor movement.” Elise is a lifetime member of the Wobblies (Industrial Workers of the World), a member of the AFM Local 1000 and Vice President of CWA/Newspaper Guild Local 32035. In 2012, she received the Lifetime Achievement award from the United Association of Labor Educators. In 2017, she became president of the Coalition of Labor Union Women (CLUW) and a month later was elected vice-president of CWA/TNG Local 32031. Learn more about her here: https://www.laborheritage.org/lhf/staff/