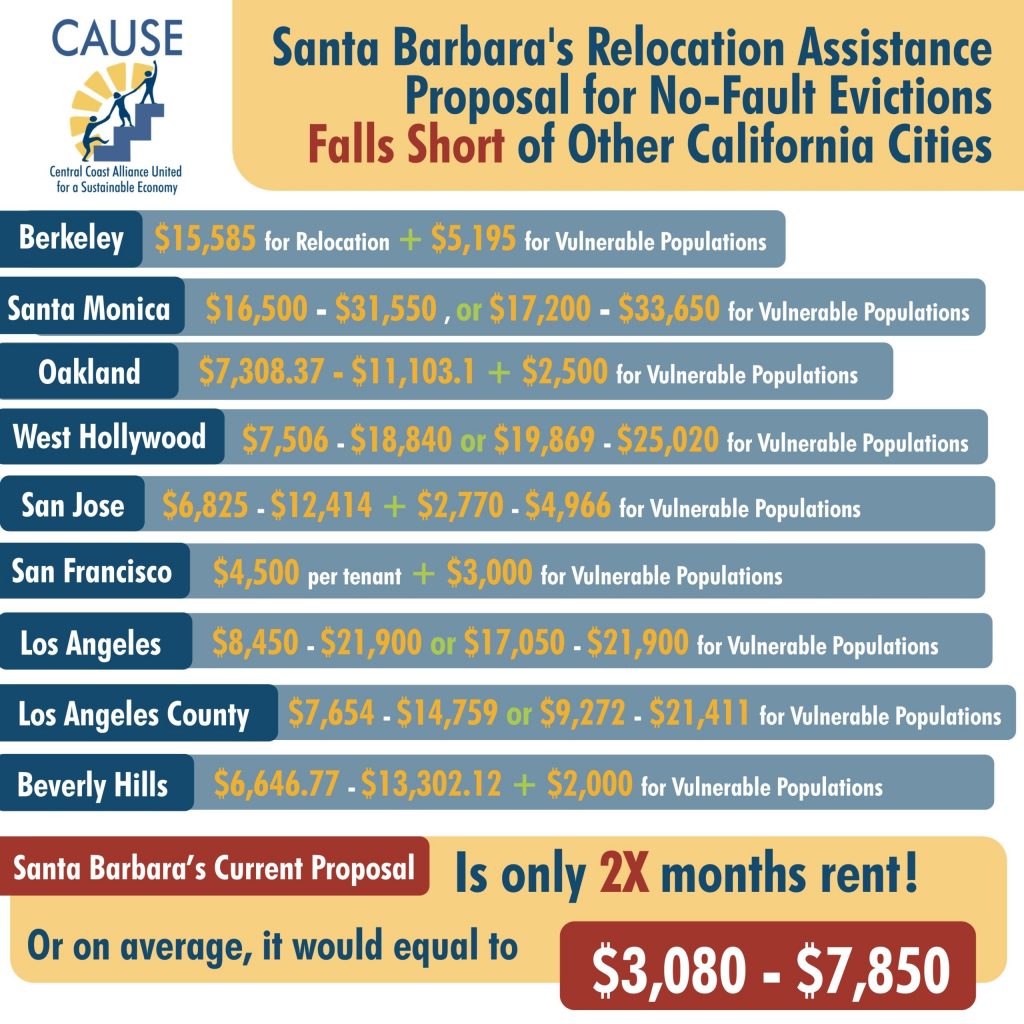 Our work for social justice in our community doesn’t stop after the election.  We have a major opportunity to stop the displacement of families from housing in our community at next week’s city council. Join us to give public comment at City Council on November 10th or Email City Council at: [email protected]gov

After many years of struggle, the Santa Barbara City Council is voting on the FINAL version of its tenant protection ordinance.

But there’s just one problem.

The proposal still allows landlords to evict families for no fault of their own with just two months of relocation assistance, or about $3,300-$7,850.

That’s a fraction of the relocation assistance most other cities require for no-fault evictions in local laws across California.

In fact, it’s less than half of what Santa Barbara City Council passed in 2006, when the city required landlords to pay relocation assistance if they convert apartments into for-sale condos!  This law has existed for 14 years in Santa Barbara with no problems, but real estate industry lobbyists claim the sky will fall if we extend the same protections to tenants facing other no-fault evictions.

Santa Barbara is a city that prides itself on its progressive values.  Why would we pass one of the weakest tenant protection laws in the state?

Landlord associations spend thousands of dollars on local elections, threatening councilmembers and trying to sway the outcome of our local politics.  We can’t let them stand in the way of basic protections for families at risk of losing their homes.

Families who are suddenly kicked out of their home can take months to find a new affordable place to live.  They have to quickly come up with first and last months’ rent and a security deposit and pay many application fees until finding a landlord that accepts them.  To avoid homelessness, they may need to pay for a hotel and storage for their belongings.  They may have to give up their job to move in with a relative far away.

It’s even harder for low-income families who struggle to find an apartment they qualify for in the expensive Central Coast, with many landlords requiring proof of earning three times the rent.  Elderly family members or people with disabilities may require a ground floor apartment or other accessibility needs.  Families with children may need to stay near their kids’ school or struggle to find a safe place for children.

Landlords continue to do business in those cities because the vast majority of landlords never evict tenants for no reason, so will simply never have to pay these costs.  Those who do are often conducting major renovations where the relocation assistance is a fraction of the cost, or moving their family member into a unit where their savings of free rent more than make up for the cost of relocating the old tenant.